Once upon a time there lived a widow with two daughters. The elder was often mistaken for her mother, so like her was she both in nature and in looks; parent and child being so disagreeable and arrogant that no one could live with them.

The younger girl, who took after her father in the gentleness and sweetness of her disposition, was also one of the prettiest girls imaginable. The mother doted on the elder daughter naturally enough, since she resembled her so closely—and disliked the younger one as intensely. She made the latter live in the kitchen and work hard from morning till night.
One of the poor child’s many duties was to go twice a day and draw water from a spring a good half-mile away, bringing it back in a large pitcher. One day when she was at the spring an old woman came up and begged for a drink.
“Why, certainly, good mother,” the pretty lass replied. Rinsing her pitcher, she drew some water from the cleanest part of the spring and handed it to the dame, lifting up the jug so that she might drink the more easily.

Now this old woman was a fairy, who had taken the form of a poor village dame to see just how far the girl’s good nature would go. “You are so pretty,” she said, when she had finished drinking, “and so polite, that I am determined to bestow a gift upon you. This is the boon I grant you: with every word that you utter there shall fall from your mouth either a flower or a precious stone.”
When the girl reached home she was scolded by her mother for being so long in coming back from the spring.
“I am sorry to have been so long, mother,” said the poor child.
As she spoke these words there fell from her mouth three roses, three pearls, and three diamonds.
“What’s this?” cried her mother; “did I see pearls and diamonds dropping out of your mouth? What does this mean, dear daughter?” (This was the first time she had ever addressed her daughter affectionately.)
The poor child told a simple tale of what had happened, and in speaking scattered diamonds right and left. 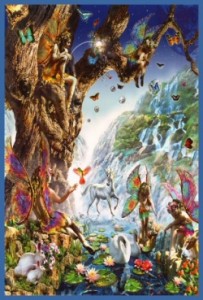 “Really,” said her mother, “I must send my own child there. Come here, Fanchon; look what comes out of your sister’s mouth whenever she speaks! Wouldn’t you like to be able to do the same? All you have to do is to go and draw some water at the spring, and when a poor woman asks you for a drink, give it her very nicely.”
‘‘Oh, indeed!” replied the ill—mannered girl; ‘‘don’t you wish you may see me going there!”
“I tell you that you are to go,” said her mother, “and to go this instant.”
Very sulkily the girl went out taking with her the best silver flagon in the house. No sooner had she reached the spring than she saw a lady, magnificently attired, who came towards her from the forest, and asked for a drink. This was the same fairy who had appeared to her sister, masquerading now as a princess in order to see how far this girl’s ill-nature would carry her.
“Do you think I have come here just to get you a drink?” said the loutish damsel, arrogantly. “I suppose you think I brought a silver flagon here specially for that purpose it’s so likely, isn’t it? Drink from the spring, if you want to!”
“You are not very polite,” said the fairy, displaying no sign of anger. “Well, in return for your lack of courtesy I decree that for every word you utter a snake or a toad shall drop out of your mouth.”
The moment her mother caught sight of her coming back she cried out, “Well, daughter?”
“Well, mother?” replied the rude girl. As she spoke a viper and a toad were spat out of her mouth.
“Gracious heavens!” cried her mother; “what do I see? Her sister is the cause of this, and I will make her pay for it!” Off she ran to thrash the poor child, but the latter fled away and hid in the forest nearby. The king’s son met her on his way home from hunting, and noticing how pretty she was inquired what she was doing all alone, and what she was weeping about.
“Alas, sir,” she cried; “my mother has driven me from home!”
As she spoke the prince saw four or five pearls and as many diamonds fall from her mouth. He begged her to tell him how this came about, and she told him the whole story.
The king’s son fell in love with her, and reflecting that such a gift as had been bestowed upon her was worth more than any dowry which another maiden might bring him, he took her to the palace of his royal father, and there married her.
As for the sister, she made herself so hateful that even her mother drove her out of the house. Nowhere could the wretched girl find anyone who would take her in, and at last she lay down in the forest and died.