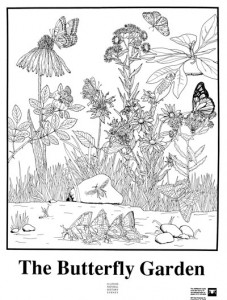 When Joan was on her own she had a secret game she liked to play.

She had found a little place under the hedge where moss and leaves made a tiny green cave. It was too small for Joan to climb into, but it was just the right size for playing fairy gardens. Joan would go round and round the garden looking for something to make her green cave pretty. She would find thistledown, forget-me-nots and fallen petals from the flowers in Mother’s garden.

When she gathered enough Joan would go back to her tiny cave and decorate it with all the pretty things she had found.

“It’s a fairy garden,” she told her mother. “Come and see. It’s a place for someone little to dance in. It looks really lovely now.”

The fairy gardens were always different, and for a while they did look pretty. In the spring Joan was allowed to pick a few violets. In the autumn there were crab apples and yellow poplar leaves. In the winter there were holly berries, although they were prickly to gather. However, the flowers faded and the berries withered and went wrinkly. Then Joan would have to make the garden all over again. It was part of the fun of it.

There was always one thing that worried Joan, however. Did anyone use her pretty garden? Did fairy people truly come to dance there? Perhaps a family of frogs might come and sing or mice have a midnight picnic.

Joan did not really care who came into her garden as long as it was somebody small who would like to be there.

“Mummy, Mummy!” she called. “Someone has been in my garden. They’ve hung up a little lamp and then forgotten to take it down again.” Mother and Joan went out to peer into the little green cave. Hanging from the leafy roof was something that did look like a little green lantern with specks of gold in it.

“Chrysalis” was a new word for Joan. She liked it because it was such a rich, unusual word. She said it twice, to enjoy the sound of it. 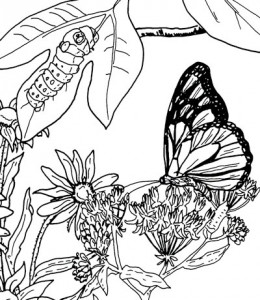 “Why,” said Mummy, “it’s a –” Then she stopped and laughed. “You must wait and see. You may have to wait for a while but you will find out.” For a few days Joan went to look at the chrysalis every morning, but it was not very interesting. It just hung there, always in the same place not changing at all. Sometimes Joan made a new little garden under it, being careful not to touch it. Sometimes she forgot it. Then, one day, at last she did find something different. The chrysalis was changing colour. It was getting darker.

“Mummy, is it getting ripe?” asked Joan, thinking of blackberries.

Mummy laughed. “It’s getting ready to change. You must watch it very carefully now.”
“Change what to?” asked Joan, but her mother just smiled.

The chrysalis turned black. Somewhere in it Joan could see a splash of red. She was really puzzled. What was the chrysalis up to?

She found out one warm, sunny day. Joan looked into her garden and the chrysalis was gone, no, not quite gone, but quite changed. It had split open and was nothing but a little empty shape hanging from the leaves. Clinging to it with six long black legs was a new butterfly with red and black wings, looking as if he had just been painted. Slowly he opened and shut his wings, so Joan was able to see the wonderful bright pattern inside them. Mother came to look too.

“You see,” she said, “it’s a butterfly. The caterpillar must have crawled in from next door where Mrs Bates has the sort of plants caterpillars like to eat. This caterpillar must have thought your garden a nice safe place. He hung himself up here and changed into a chrysalis. All the time the chrysalis hung here he was inside, turning into a butterfly. Now he has broken out of the chrysalis and is ready to fly off and enjoy the summer. His wings will soon be strong enough.”

As Mother spoke the butterfly fluttered rather unsteadily out of the little green cave and on to the hedge. He sat there for a moment, and then set off towards the flower beds.

“Well, I’m glad someone has used my garden,” Joan said. “Every garden ought to have someone to live in it. Do you think that butterfly liked coming out and seeing my garden around him?”

“A special butterfly-sized garden!” said Mummy. “I’m sure he did. Wouldn’t you like it, if you were a butterfly?”