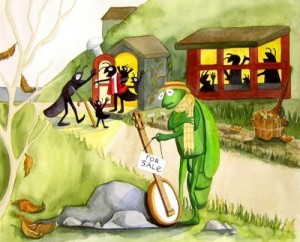 The Ant and the Grasshopper

grasshopper in musical moodOn one fine summer’s day in a field a Grasshopper was hopping about in a musical mood. An ant passed by bearing along with great toil an ear of corn he was taking to the nest.

ant”Pooh! Why bother about winter?” said the Grasshopper; we have got enough food at present.” But the Ant went on its way and continued its toil.

Finally, when winter came, the Grasshopper found itself dying of hunger, while it saw the ants distributing corn and grain from their storage.

Then the Grasshopper understood that…

It is best to prepare for the days of necessity.