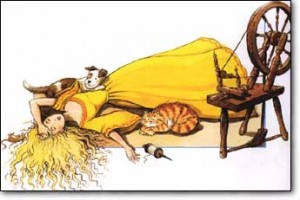 Once upon a time, there was a King and Queen. And when their baby daughter was born they were so happy they decided to have a big party. They invited all their family, all their friends and all the fairies in the land. Now there were 13 fairies altogether but the king but queen only invited 12. They forgot about the 13th. And that was something they should not have done.

Well, it was a splendid party! There were silver dishes piled high with delicious food and golden plates at every place. And when everyone had finished eating, the fairies gathered around the baby’s cradle and they each made a magic wish. The princess shall be beautiful said the first. And happy, said the second. And kind, said the third. And so they went on. The princess was to be brave, and clever and truthful. She was to have a sweet singing voice and light dancing feet

And, then, just as the twelfth fairy was about to make her wish, in came the thirteenth. She was furious, because she had not been invited to the party. Here is my wish, she said. “When the princess is 16 years old, she will prick her finger on a spindle and she will die.” And with that, the thirteenth fairy vanished.

hen the 12th fairy said, “I cannot change all of the wicked fairies powerful magic.” So the princess will prick her finger but she will not die! She slept for a hundred years. The king and queen thanked the fairy for her kindness but they were not happy. They did not want their daughter to sleep for a hundred years. So they ordered that every spinning wheel and spindle in the land must be chopped up and burnt. Then they thought that the princess was safe.

The years passed and the princess grew up. She was very beautiful and clever at lots of different things. She was, in fact, everything the fairies had wished her to be. On her sixteenth birthday, the princess was exploring the castle when she came to a little room at the top of a tall tower. And in that room was an old woman sitting by a spinning wheel. “What are you doing?” asked the princess?”

“I am spinning,” said the old woman, who was really the wicked thirteenth fairy, “would you like to try?”

“Oh yes,” said the princess, and she sat down by the spinning wheel. But as soon as she touched the spindle, the sharp point pricked her finger and she fell asleep.

And the old woman vanished. At that same moment, the king and the queen, the servants, the cats and the dogs all fell asleep! Even the fire stopped burning and the roasting meat stopped sizzling. Everything slept.

Then a hedge of wild roses grew up around the castle. It grew and it grew until the castle was hidden.

One hundred years passed and then a prince came riding by and saw the top of the tower rising up above the hedge of roses. How strange, he said, I never knew there was a castle here!

He jumped off his horse and lifted his sword to cut away the hedge. But as soon as the sword touched the branch, a path opened up in front of him. So prince walked freely through the hedge. He entered castle, and walked from room to room. Imagine his surprise, everyone and everything was fast asleep.

At last he entered a little room at the end of a tall tower and he saw the sleeping princess. She was so very beautiful that he bent down and kissed her. Then the spell was broken and the princess opened her eyes.

At the same moment, everyone and everything in the castle awoke! The king yawned, the queen blinked, the cats had a good stretch and the dogs wagged their tails.

The servants began to work, the fire began to flame, and the roasting meat began to sizzle. A hundred years had not changed anyone or anything.

And what happened next? Why the beautiful princess married the prince, who had woken her from such a long deep sleep.