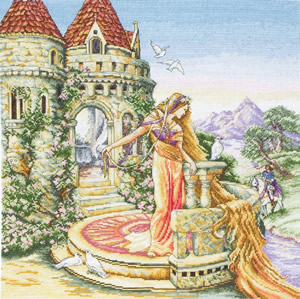 There once lived a couple who longed to have a child. Finally, their wish came true.
As the wife waited for the child to be born, she sometimes stared out the window at the garden next door. In it grew some delicious-looking rapunzel lettuce.
But the garden belonged to a witch, and no one dared to go into it.
Soon, the wife could think of nothing but that lettuce. She grew paler and paler. Finally, her worried husband decided to sneak into the garden after dark and pick some.
His wife ate it all, but it only made her want more. So the husband went back to the garden. But this time, the witch caught him.
“How dare you steal my rapunzel!” she screeched.
The terrified husband told her of his wife’s craving.
“Take all the lettuce you want, then,” said the witch. “But in return, you must give me the child.”
The poor man agreed.
As soon as the child was born, the witch took it away to raise as her own. She called the baby girl Rapunzel. Rapunzel grew to be so beautiful that the witch decided no one else must ever see her.
So when the child reached the age of twelve, the witch shut her in a tower deep in the forest. The tower was very tall, and had no door. Poor Rapunzel had no way of escaping.
When the witch came to visit, she called, “Rapunzel, Rapunzel, let down your hair.” Then the girl threw her long braid out the window, and the witch climbed it to the top of the tower. A few years later, a prince happened to be riding through the forest. From a distance he heard Rapunzel singing to amuse herself. He was immediately drawn to the beautiful voice, but once he found the tower, he could find no way in. The prince could not stop thinking about the voice in the tower. Every day he would go back to listen and every night he would leave brokenhearted. He still could find no way in.
Until one day from his hiding place, he saw the witch and heard her call.
“Rapunzel, Rapunzel, let down your hair.” Then a long braid fell from the window all the way down to the ground.
“If that’s the rope to climb, I’ll try it,” the young prince thought to himself.
As Soon as the witch had gone, the prince repeated her call.
“Rapunzel, Rapunzel, let down your hair.”
Then he climbed the long braid to the top.
At first Rapunzel was frightened, as she had never before seen a man. But the prince told her how he had been drawn to her sweet voice and asked her to marry him. Rapunzel liked him better than the witch and agreed.
But she still had no way to leave the tower. The prince promised to bring a ball of silk each time he came to visit so she could weave a ladder and escape.
The prince visited every night, and Rapunzel kept his visits a secret. But one day, without thinking, she blurted out to the witch, “Why are you so much heavier than the prince?”
“How dare you trick me!” screamed the witch, and in a fury, she cut off Rapunzel’s long hair. The witch laid an evil spell on Rapunzel that sent her to a far-off land.
Then she tied the long braid to the windowsill and waited for the prince. Only as he climbed through the window did he realize he had been tricked.
“Your little songbird is gone,” cackled the witch, “and you will never see her again!”
The prince was beside himself with grief and leapt from the tower window. He survived the fall by landing in a thornbush, but the thorns scratched his eyes. The prince was blinded! How would he ever find Rapunzel now?
For months to come, the prince wandered blindly through the forest, weeping. Whenever he met people along the way, he would ask if they had seen a beautiful girl named Rapunzel, and he would describe her to them. But no one had ever seen her.
Then one day, the prince heard someone singing a sad but beautiful song. He recognized the voice at once and ran towards it, calling out Rapunzel’s name.
Rapunzel rushed into the prince’s arms and cried tears of joy at finding her beloved. But as her tears fell on the prince’s eyes, a strange thing happened – the prince could see again!
Rapunzel and the prince found their way back to the kingdom. Soon they were married and lived happily ever after..