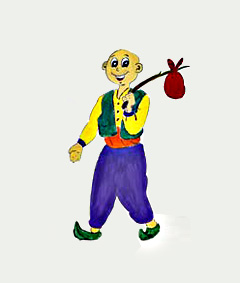 Once upon a time there was a bald boy; his mother calls him baldy boy. One day he asked his mother’s permission to go to the fishing. He thought that he might be his lucky day and he can catch couple of fishes so they can have a nice meal.

Bald boy cleaned its scales, he split it in two pieces and he saw there is a huge cup in its stomach. He felt so happy and so lucky and he thought that I will bring my mother both of them: the fish and the cup.

He filled the cup with water and he wanted to clean the fish. And then something unnatural happened. The water that he has been poured from the cup becomes gold. He could not believe it to his eyes and he tried couple of times. This might be a magic cup. He said I have to let my mother know about it to himself and run to his home.

Later on he tried it again and he filled the magic cup with water and emptied and every time he emptied all the water became gold. After a while, he was the richest person on this town. He was even wealthier than the emperor. A Couple of days after, he built a big palace to himself and he hired maids. He was able to buy everything he wanted and everything he would like to eat. At the end though, he became a bit naughty and spoiled. He started to spend his money on unnecessary things and he even did not consider his mother who advised him to be careful and be wise. He was saying that “I’ve got the magic cup and I can do whatever I want to”.

When the bald bay dramatically changed, become a spoiled and a greedy person, people around him start to talk about his behavior and lost their respect toward him and they said that they do not like him anymore.

One day, bald boy went by the river again and he said water in the river would not go less and I can build another palace to myself. His pride and greed makes him act like crazy. He was not even thinking anything else anymore. And all a sudden the magic cup fell into the river and bald boy try to catch it and he also fell of into the river. He was almost drowned. Eventually he saved his own life and able to make it shore but unfortunately all the gold he saved by the river stolen by thieves.

Magic cup was missing and bald boy felt that there is no way to find it anymore. He went to his mother told her what happened while he was crying.

His mother said: “Do not worry my son. Something comes from nothing it goes to nothing. You did not earn that cup with your effort. On the top of it you become so spoiled as a result of having it. This is much better for you. At least you are not going to look people down anymore.”

Bald boy agreed on those words and from that day on he never mentioned about the magic cup.