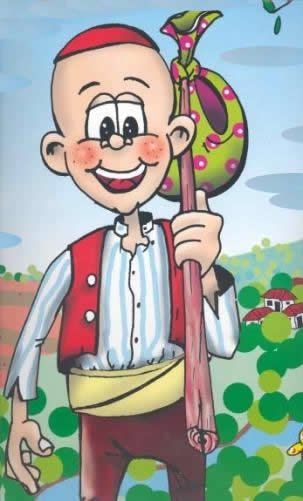 Bald boy got the gold and when he was on his own way he saw a group of people beating up a cat. He said “take this piece of gold and stop beating him”.  He rescues the cat and he and cat start to walk again. A while later, he saw couple of people beating up a dog. He again said “stop it, what are you doing?” and he saves the dog as well.
And then he continues to walk along with a dog and cat. When he almost has got near by to the town, he saw a crowd again and he saw woodchoppers trying to kill a snake. He could not able to stop himself again and says: “take this piece of gold and let him go.” And he also saves the snake.
The snake said: “The son of the Adam, I am the son of the snake emperor. I had argued with my dad and I hide over here. But they found me. I wanted to go back to my dad and if you want you can come along with me. Bald boy decided to go with the snake and soon after they introduce themselves to the snake emperor. Snake emperor feels so happy to see his son again and he wants to give a reward to the bald boy and he says: “make a wish, anything you want to” and at that moment prince snake whisper in his ear and says “ask him to give the seal under his tongue” and Bald boy says : “ I want your seal”
The emperor says that you ask for my most precious treasure. I am gonna give it to you because you saved my son. He says that whatever he wishes his wishes will become true with this seal and gives it to the bald boy. Bald boy got the seal, the dog and the cat and go back to his house. When his mother sees that he did not bring home nothing but a dog and cat she gets mad at him.
The day after bald boy says his mother and says go and ask for emperor’s young daughters’ hand. His mother says that, he would not give his daughters’ hand to you. But bald boy was so insist and she eventually went to the palace to ask for emperors’ daughters’ hand.
Emperor says if you build a big palace just across my palace then I can say okay. His mother returns back to home and tells what emperor wants from them.
Bald boy says: no worries, I can do it in five minutes. And he asks the seal to make a big palace. When emperor gets up the day after and sees the big palace built in a night he has to give his permission to him.
Bald boy moved into his new palace and he put his seal to the best place in it. One day in the absence of bald boy, some one comes to the home as a bead seller who is aware of the seal and he tries to sell beads to bald boys’ wife. His wife says that she does not have any money and this con man says you do not need to give me any money, you can get whatever you want to trade that seal as an exchange he says. Wife says ok and gives to bead seller and gives seal to him.  He got the seal and cross the lake just right after. The palaces fall apart right away. The emperor takes her daughter back as well. When bald boy come back to the home with the cat and the dog and see what happened he feels so unhappy and feels so sad.
Cat says. I can find the seal but I can not get across the lake. Dog says, I can swim through lake and you can sit on me. They do that, and come to the man’s house. When they arrive to the home dog waited in front of the house and the cat catches a mouse and put hot pepper to the his tale. Later on he walked in and he put the mouse’s tale into the man’s nose. Therefore, the man sneezes and the seal under his tongue fall off. The cat catches the seal and along with the dog they run to the lake. The dog start swimming back to their place but in the middle of the lake cat drops the seal from his mouth and a fish swallow the seal. This time dog gets the responsibility and they both went to the fish market. The dog sniffs each fish and find out which one has the seal and show it to the bald boy. Bold boy buys that fish right away and they return back to their house.
Bald boy gets back his palace and his wife and for the honor of this new start he makes celebrities for 40 nights and 40 days.