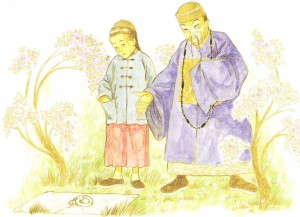 Aladdin and the Wonderful Lamp

Far off in a beautiful city in China a ragged urchin called Aladdin used to play in the street. His father, a poor tailor, tried to make him work, but Aladdin was lazy and disobedient, and refused even to help in his father’s shop. Even after his father died Aladdin still preferred to roam in the streets with his friends, and did not feel ashamed to eat the food his mother bought with the money she earned by spinning cotton.

One day a wealthy stranger came to the city. He noticed Aladdin in the street and thought, “That lad looks as though he has no purpose in life. It will not matter if I use him, then kill him.”

The stranger quickly found out that Aladdin’s father was dead. He called Aladdin over to him.

“Greetings, nephew,” he said, “I am your father’s brother.. I have returned to China only to find my clear brother, Mustapha, is dead. Take this money and tell your mother I shall visit her.”

Aladdin’s mother was puzzled when Aladdin told her the stranger’s message. “You have no uncle,” she said. “I don’t understand why this man should give us money.”

his brother and offered to buy a fine shop where Aladdin could sell beautiful things to the rich people in the city. He gave Aladdin some new clothes and in a short while Aladdin’s mother began to believe this man was a relation.

The stranger now invited Aladdin to go with him to the rich part of the city. Together they walked through beautiful gardens and parks where Aladdin had never been before. At last the stranger showed Aladdin a flat stone with an iron ring set into it.

“Lift this stone for me, nephew,” he said, “and go into the cavern below. Walk through three caves where you will see gold and silver stored. Do not touch it. You will then pass through a garden full of wonderful fruit and beyond the trees you will find a lamp. Pour out the oil and bring the lamp to me. Pick some of the fruit on your return if you wish.”

Aladdin lifted the stone and saw some steps leading down into a cave. He was frightened to go down but the stranger placed a gold ring with a great green emerald on his finger.

Now the stranger was in fact a magician. He had read about a lamp with magical powers and he had travelled far to find it. He knew the magic would not work for him unless the lamp was fetched from the cavern and handed to him by someone else. After Aladdin had brought him the lamp the magician planned to shut him in the cave to die.

Down in the cavern Aladdin found all as he had been told. He hurried through the rooms filled with silver and gold, and passed through the garden where the trees were hung with shimmering fruit of all colours. At the far end stood an old lamp. Aladdin took it, poured out the oil, and then picked some of the dazzling fruit from the trees as the magician had suggested. To his surprise they were all made from stones. Aladdin took as many as he coul carry and returned to the steps.

“Give me the lamp,” demanded the magician as soon as Aladdin came into sight.

“Help me out first,” replied Aladdin who could not hand him the lamp because his arms were so full. They argued fiercely until crash, the stone slab fell back into place. The magician could not move the stone from the outside, nor Aladdin from within. He was trapped. The magician knew he had failed in his quest and decided to leave the country at once.

For two days Aladdin tried to get out of the cave. He became weak with hunger and thirst and finally as he sat in despair he rubbed his hands together. By chance he rubbed the gold ring that the stranger had given him. There was a blinding flash and a genie appeared. “I am the genie of the ring. What can I do for you, master?”

“Get me out of here,” Aladdin gasped. He was terrified of the great burning spirit of the genie glowing in the cavern. BefOre he knew what had happened he was standing on the ground above the entrance to the cavern. Of the stone slab there was no sign. Aladdin set off for home and collapsed with hunger as he entered the house.

His mother was overjoyed to see him. She gave him all the scraps of food she had and when she said she had no more Aladdin suggested selling the lamp to buy some food.

“I’ll get a better price for it, if it’s clean,” she thought, and she rubbed the lamp with a cloth. In a flash the genie appeared. Aladdin’s mother fainted in horror but Aladdin seized the lamp. When the genie saw him with the lamp it said:

“I am the genie of the lamp. What can I do for you, master?”

“Get me some food,” ordered Aladdin.

Then it happened that Aladdin saw the sultan’s daughter, Princess Badroulboudoir. Aladdin loved her at first sight and sent his mother to the sultan’s court to ask the sultan permission for the princess to marry him. He told her to take as a gift the stone fruits he had brought from the cave.

It was several days before Aladdin’s mother could speak with the sultan, but at last she was able to give him the stone fruits. The sultan was truly amazed.

“Your son has such fine jewels he would make a good husband for my daughter, I am sure,” he told Aladdin’s mother.

But the sultan’s chief courtier was jealous. He wanted his son to marry the princess.Quickly, he advised the sultan to say he would decide on the marriage in three months’ time. Aladdin was happy when he heard the news.

But at the palace, the chief courtier spoke against Aladdin and when Aladdin’s mother returned in three months, the sultan asked her: “Can your son send me forty golden bowls full of jewels like the ones he sent before only this time carried by forty servants?”

Aladdin rubbed the lamp once more and before long forty servants each carrying a gold bowl filled with sparkling jewels were assembled in the courtyard of their little house.

When the sultan saw them, he said:

“I am sure now that the owner of these riches will make a fine husband for my daughter.”

But the chief courtier suggested yet another test. “Ask the woman,” he said, “if her son has a palace fit for your daughter to live in.”

“I’ll give him the land and he can build a new palace,” declared the sultan, and he presented Aladdin with land in front of his own palace. Aladdin summoned the genie of the lamp once more. Overnight the most amazing palace appeared with walls of gold and silver, huge windows, beautiful halls and courtyards and rooms filled with treasures. A carpet of red velvet was laid from the old palace to the new, for the princess to walk on to her new home. Aladdin then asked the genie for some fine clothes for himself and his mother, and a glorious wedding took place.

Aladdin took care always to keep the wonderful lamp safe. One day the princess gave it to an old beggar who was the magician in disguise, but that story will have to keep for another time.